We almost felt like we were Floridians yesterday; our high reached 97 degrees, with the heat index in the 100’s!  While we are enjoying the weather (after all, this is what we are moving in to!), we do wish Mother Nature would tone it down a little, if nothing else but to save on our electric bill!

We received a shipment of boxes late Monday afternoon, and one of the boxes he brought was a huge TV/Large Picture box, which we requested for Ben’s marble vortex toy.  At first we thought it might be a little too big,  but then realized the toy and several odd-shaped items could fit in there as well, so we’re actually quite happy that the box was over sized.

We’ve been experiencing a series of “lasts”.  We recognize that certain things we do will be the last time we do them, possibly forever (but who knows what the future holds?)  We met with our insurance agent yesterday, to find out information regarding the steps we need to do to transfer our policies down to Florida.  We have been with this particular agent since we first moved to Fond du Lac from Chicago, twelve years ago.  We’re finding it’s hard to walk away from local businesses that we’ve patronized for so long.  It’s not going to prevent us from moving, but it’s also producing sadness and a feeling of loss that really we did not anticipate.  There are a lot of unique businesses that only exist either in this city or in the Midwest, that we will be walking away from.

One of these establishments is Friar Tucks, and we decided to take advantage of the kids still being in school, and do a last visit. 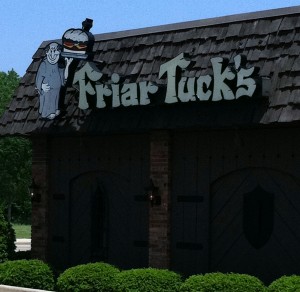 This is a small bar/restaurant that serves the absolute best one-third pound cheeseburgers.  There are a couple other locations in Wisconsin, located in Oshkosh and Manitowoc, and our son Nick works as a cook at the seafood restaurant this same company owns.

This morning we will have another “last”– our son Ben’s 5th grade graduation.  This is also a tough moment, as we have had children attending this particular elementary school for eight years.  Ben is particularly having a hard time separating from this school, his friends and teachers, and especially his aide, who has been a constant in his life since Kindergarten. She entered his life at a time when the school district was moving away from 1:1 aides as “not being in the best interest of children who have autism”, and we are so thankful that she has been able to remain by Ben’s side in spite of that fact.  We will post pictures later of the celebration!

We will stop posting updates on the “Wishes-And-Pixie-Dust” friend on Facebook effective July 22nd, so we encourage you to friend and follow us on Facebook and Twitter.   We plan to post a lot of pictures along the way using Twitter, and will be able to post blog updates each night.    We are Mark Vitek and Jen Vitek on Facebook, and @FondyMark and @jvitek on Twitter.  We do encourage you to friend and follow both of us, because we won’t be posting the same updates on both accounts.  It depends on who’s not driving!

Have a magical day!!