Our kids are on spring break this week, and we have no real plans except to pack boxes. Boring, yes I know.  But with the image of the Magic Kingdom popping into our heads, it makes it so much easier 🙂

Saturday we decided to make up for a lost field trip.  When Ben was in first grade, his class went to the Children’s Museum in Appleton for their major field trip of the year.  However, poor Ben was not able to go due to a stomach flu.  Sadly, yes, it has taken us this long to go there, but we decided it was a must-do before we leave Wisconsin.   I have posted some pictures of the kids having fun:

Catie & Ben standing in the golf/physics area.  We had to take a picture of them standing underneath the giant golf ball, aka Epcot. 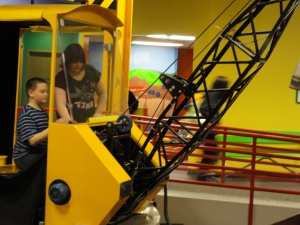 And of course, suiting up to drive the fire truck!

The kids co-piloting an airplane:

And the treehouse on the way out, which reminds us a little of The Tree of Life at Animal Kingdom:

In other news, we have been slowly packing boxes, and donating unwanted items to Goodwill.   While we were out shopping at Walmart today, our landlord showed our house to prospective tenants.  It seemed really weird knowing that strangers were walking through *our* house!  We officially gave notice April 1st, but he has known since January that our intent was to leave.  He is the most awesome-ist (if that is a word!) landlord ever, and we really wanted to make sure that he had as much notice as possible.  We don’t feel he will have a problem renting this house out.  It really is a great house, and while we are excited about moving into a new place, we are also sad to leave our home.  But our hearts belong in Florida, and that is where we must be.